Our website is still in the process of being developed — please have a look at what we’ve done so far; more will be coming soon! In the meantime, contact us (Mick & Lynn Oakey) via e-mail at iret@btinternet.com or telephone and leave a message on 07854 840004.

IRET NEWSFLASH, August 16, 2018: Three of Mick’s stonecarvings are on show (and for sale) at this year’s Association of Sussex Artists Annual Exhibition in the Drill Hall, Denne Road, Horsham RH12 1JF from Friday August 17 until Saturday August 25 — see images below.  For more details, visit http://www.associationofsussexartists.co.uk/. 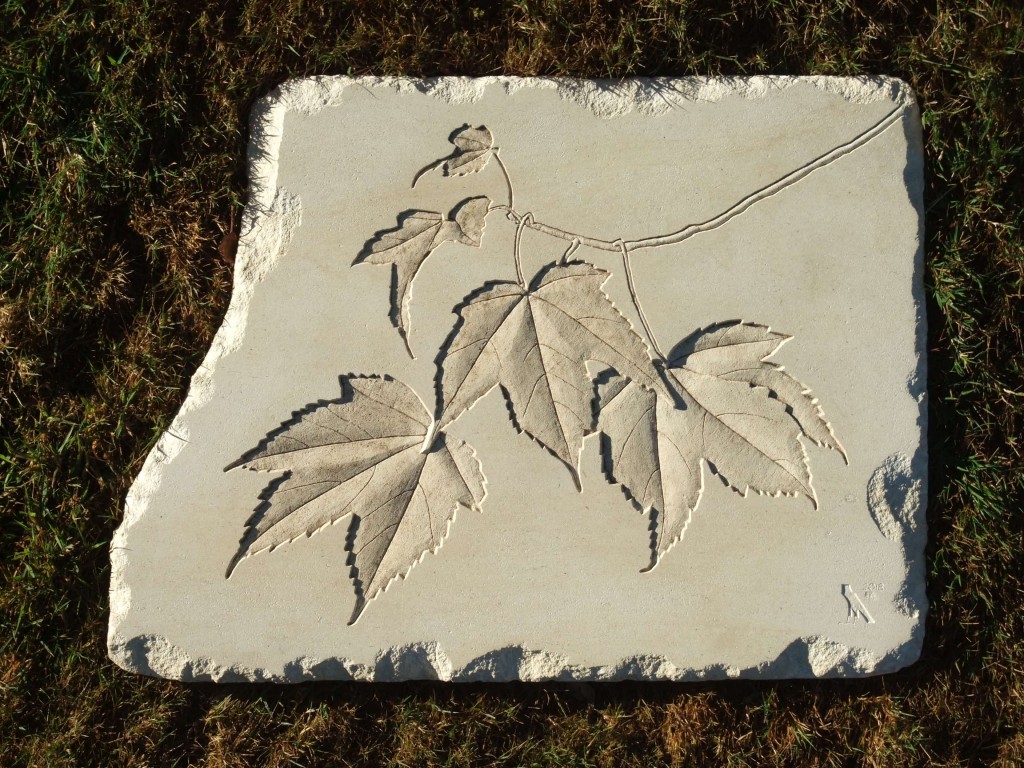 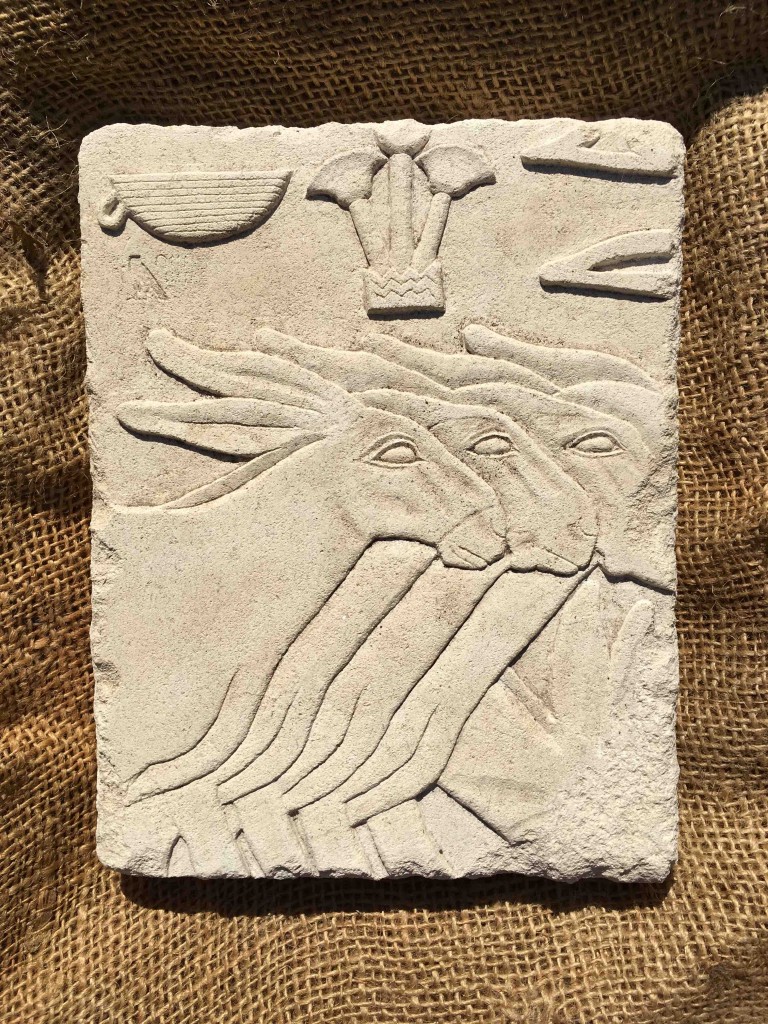 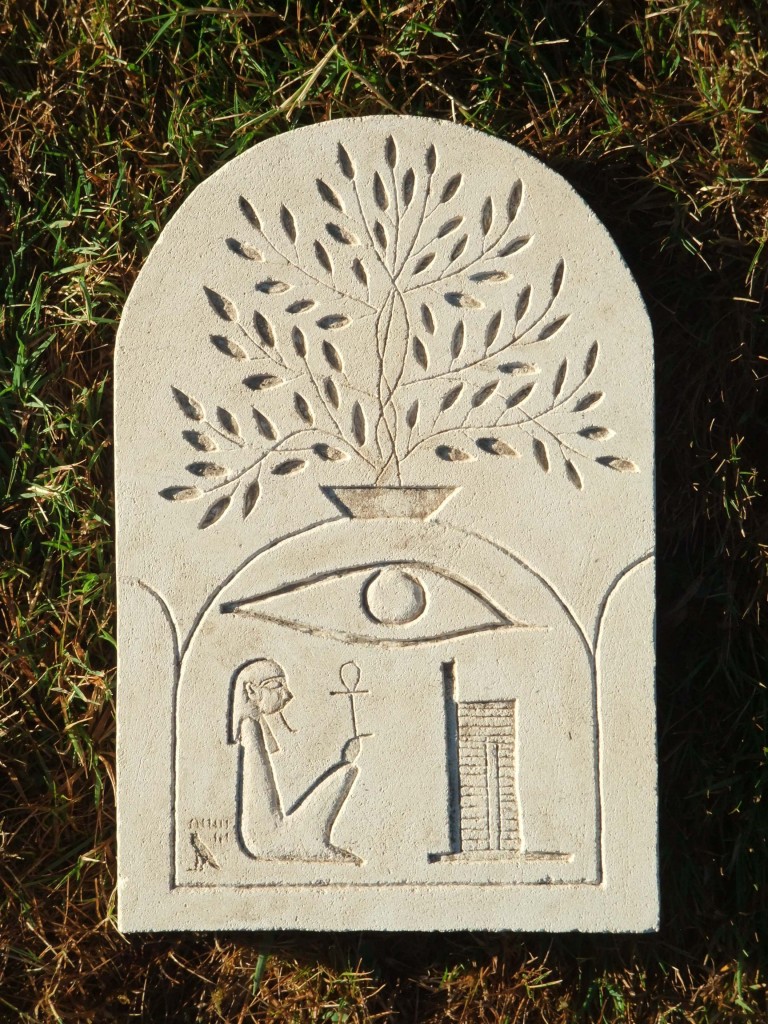 IRET NEWSFLASH, August 20, 2017: The trio of stonecarvings that Mick submitted for this year’s Association of Sussex Artists Annual Exhibition in Horsham all got selected, and are on show in the Drill Hall, Denne Road, until Saturday August 26 — see images below.  For more details, visit http://www.associationofsussexartists.co.uk/. The Ankh sold at the Private View on August 18, but Ma’at was still available at time of writing for £25, and the big Hathor carving for £495. 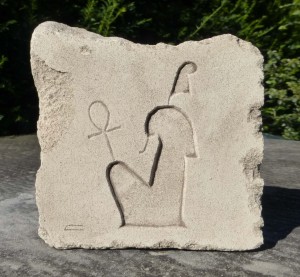 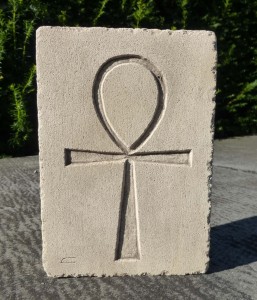 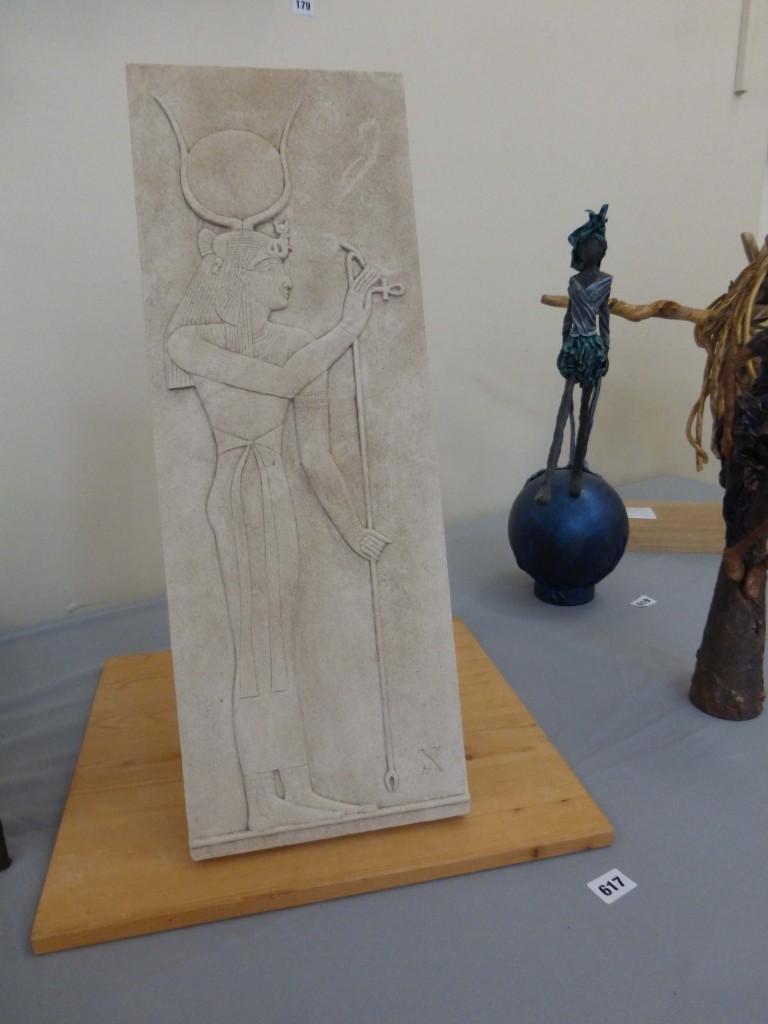 IRET NEWSFLASH, July 15, 2017: Mick is at Horsham Museum today, doing his stonecarving as an “artist in residence” alongside fellow members of the Association of Sussex Artists. He was there last Saturday too — see pic below of him hard at work. (PS If you’ve wondered why our website has been offline for the past few days, it’s because our provider had a major server meltdown. All fixed now, we hope!) 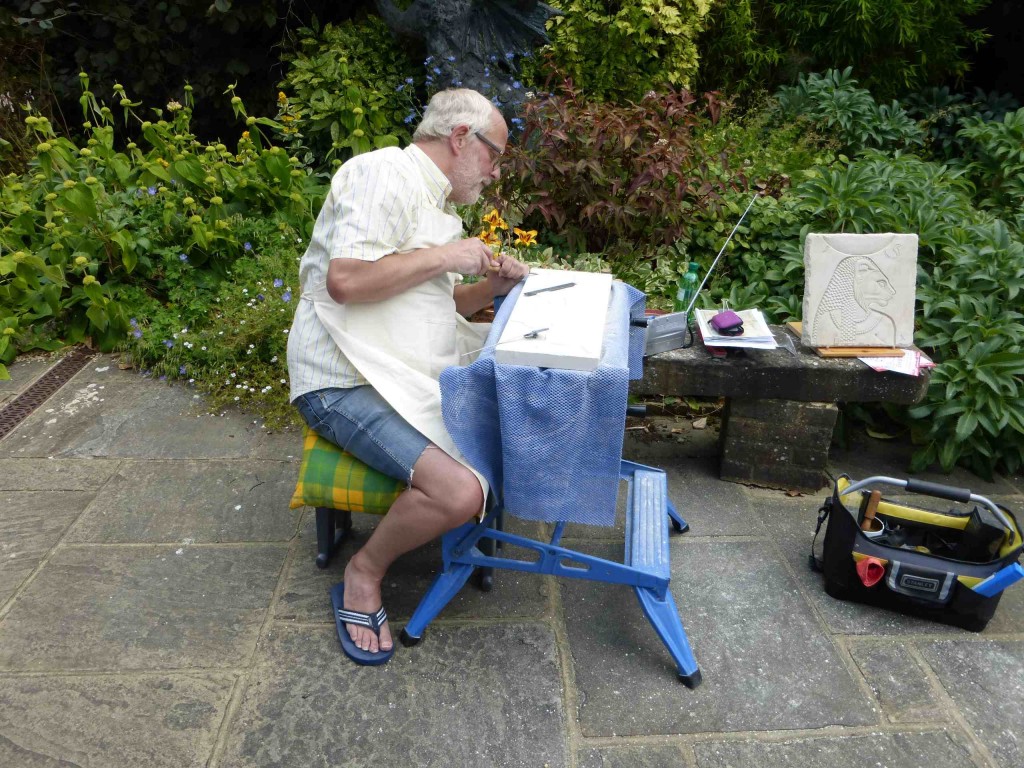 IRET NEWSFLASH, December 11, 2016: We were at Bloomsbury Summer School’s study-day at UCL in London yesterday, presented by the great John Romer. We sold lots of jewellery and Egyptological Christmas-cards, and casts of our newest pharaonic-cat stonecarving — seen in the pic BELOW taken by Gwyn Ashworth-Pratt — sold like hot, er, cakes! If you’d like one, e-mail us; they were inspired by the famous Gayer-Anderson Cat in the British Museum.

IRET NEWSFLASH, September 26, 2016: Somewhat off-topic as it’s not actually part of Iret, but Mick was awarded a prize today at the British Museum for his “Fields of Eternity” Egyptian-themed grass-maze/meadow-garden, which he designed and helped create at Chiddingstone Castle in Kent. The garden (seen in an aerial view BELOW) occupies an acre of ground beyond the Castle’s North Lawn, and mainly comprises mown paths in rough grass. Elements are arranged around a representation of the Nile (running south—north) and culminating in the Delta, stylised into a lily flower; and a temple axis (running west—east), with several “chambers” including a hypostyle, in which paving slabs represent column bases (upon which visitors may stand to represent the columns). The quadrants created by the two axes are filled with (clockwise from lower left): a 1:1 scale plan of Tutankhamun’s tomb, on the same compass orientation as the original (and with a sandpit plan of the sarcophagus, in which cement shabtis, scarabs etc are buried for youngsters to excavate); a cross-section of the Pyramid of Khufu; a circular “Sun Court”, the Amarna-style handed rays of which work in conjunction with a central post as a giant sundial; and a half-scale plan of Khufu’s (first) funerary boat. There are also narrow squiggly “robbers’ tunnels” acting as shortcuts between different parts of the site; these are especially exciting for youngsters in summer, when the surrounding grass can be higher than their eye level. The garden was conceived as a teaching-aid to complement the Castle’s Egyptian collection, and as a source of fun and interest for all. Mick won the South-East Region category of the 2015 Marsh Trust “Volunteers for Museum Learning” Awards. 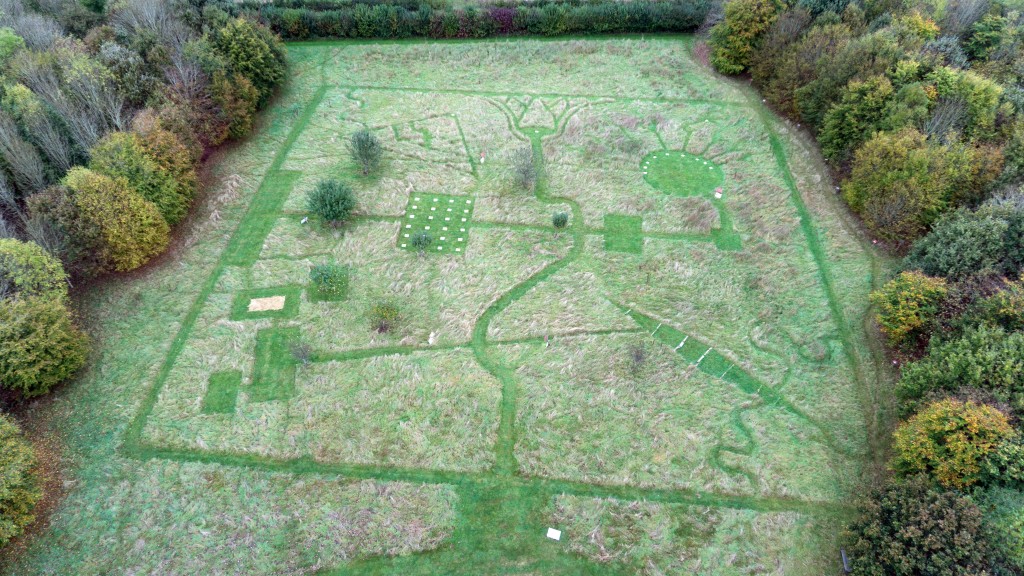 IRET NEWSFLASH, August 19, 2016: Some of Mick’s stonecarvings, including this Sekhmet (below) inspired by a temple relief at Kom Ombo, are on display at the 104th Exhibition of the Association of Sussex Artists in Horsham. The exhibition is on until Saturday August 27 — For more details, visit http://www.associationofsussexartists.co.uk/ 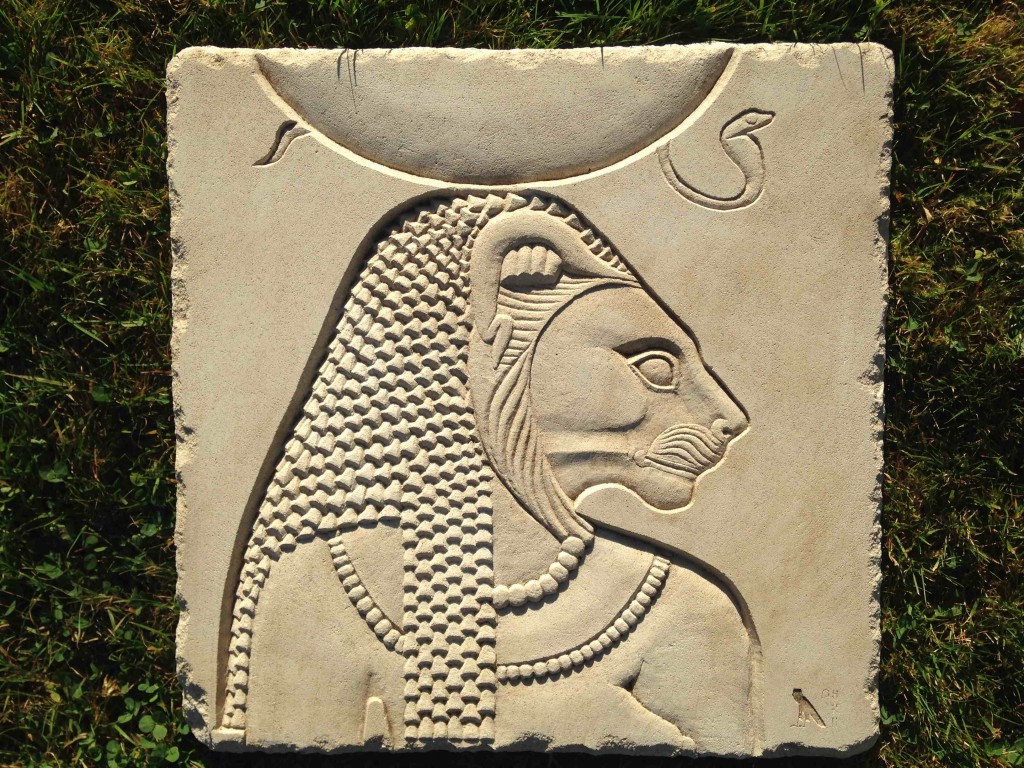 IRET NEWSFLASH, July 16, 2016: Mick is at Horsham Museum today, demonstrating stonecarving alongside fellow sculptors, potters and painters from the Association of Sussex Artists. It’s part of Horsham Festival, a new arts festival in the district.

IRET NEWSFLASH, June 11, 2016: We had another great day with our stonecarvings, jewellery and cards at the spring Bloomsbury Study Day at UCL in London today. We’ve been experimenting with patination techniques on some small stonecarvings and casts, and the results have proved popular — we sold all our patinated pieces at the event! Here are three “pharaonic fragments” we sold; each are about 10cm x 6cm: 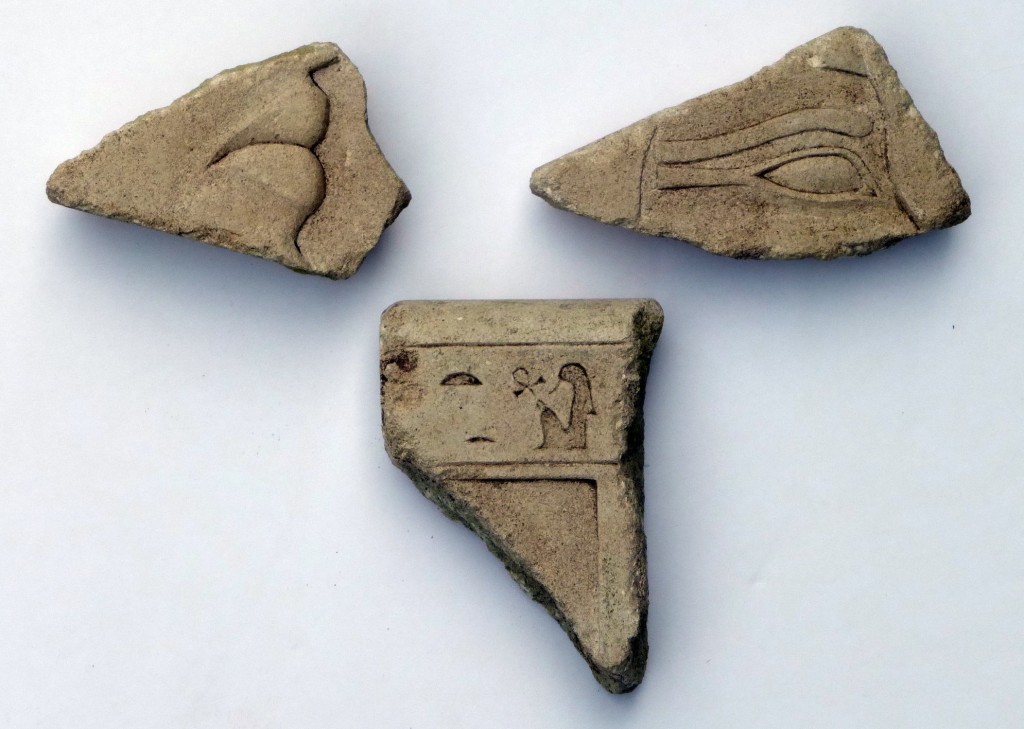 IRET NEWSFLASH, December 8, 2015: We are taking our stonecarvings, jewellery and Christmas cards to the final Bloomsbury Study Day of 2015, at UCL on Sunday December 13 — “When Science and Archaeology Collide: a day of discovery with Dr Jo Marchant”. For more details of the day, see http://www.egyptology-uk.com/bloomsbury/study_days.htm

IRET NEWSFLASH, September 23, 2015: An enlarged selection of our products, including jewellery as well as stonecarvings and Christmas cards, is in the Pop Up Horsham shop (Unit 60, Swan Walk, Horsham, West Sussex RH12 1PT) from September 28 to November 1 — come and see us, and chat/browse/buy!

IRET NEWSFLASH, August 13, 2015: Four of Mick’s Egyptian stonecarvings are in the Association of Sussex Artists Exhibition in Horsham, which opened today and runs until August 22. Here are a couple of them (see below; click on the images to see enlargements) — one based on the famous Gayer-Anderson Cat in the British Museum, and the other based on a male figure from the 18th-Dynasty Tomb of the Vizier Ramose on the West Bank of the Nile at Luxor. For more details of the exhibition, visit http://www.associationofsussexartists.co.uk/ 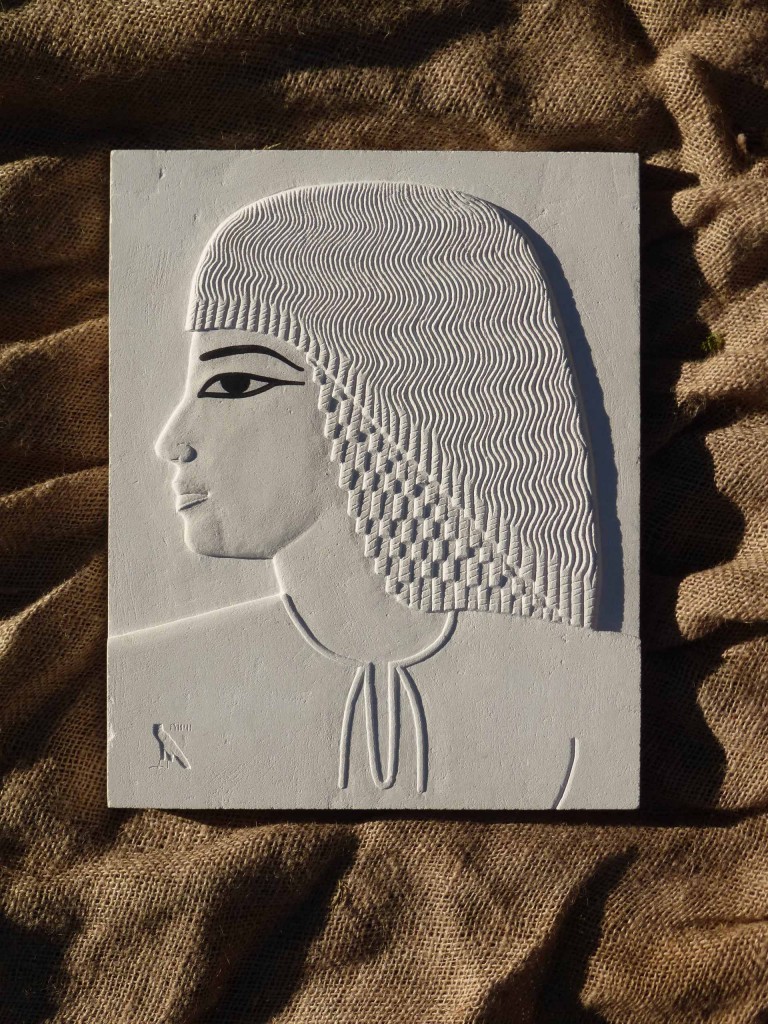 IRET NEWSFLASH, July 31, 2015: Mick is taking Iret’s pop-up mini-souk to Bloomsbury Summer School again today — many thanks to the school’s Co-Director Lucia Gahlin for the invitation. Come and browse, chat and buy in  University College London’s History Dept common-room today between 1300 and 1400hr. For more details about the summer-school see www.egyptology-uk.com/bloomsbury. 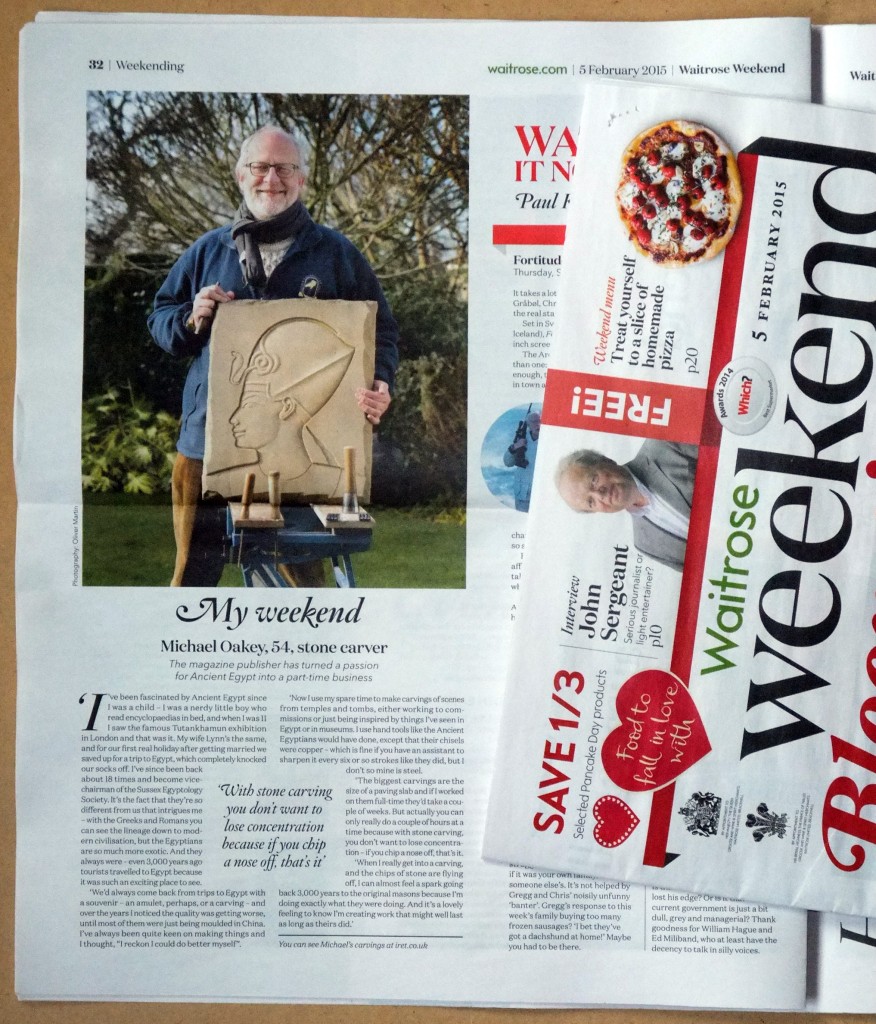 The article shows Mick in his favoured location for stonecarving — outdoors — with a favourite piece, pharaoh Thutmose IV wearing a “khepresh” battle-crown. The portrait photograph is by Oliver Martin/www.olivermartin.co.uk.

IRET NEWSFLASH, November 24, 2014: After a terrific day at the Bloomsbury Summer School study-day in London last Saturday, we are frantically making jewellery to replenish stocks for our next event, the Chiddingstone Castle Christmas Fair in Kent on Saturday November 29! We will be there with jewellery, stonecarvings and (appropriately) our Egyptological Christmas-cards. For more details see http://www.chiddingstonecastle.org.uk

IRET NEWSFLASH, October 28, 2014: At last, Mick has delivered his most ambitious carving so far to the client who commissioned it: a limestone replica of one of the banqueting ladies in the exquisite Tomb of the Vizier Ramose on the West Bank at Luxor. It was more than two years in the making — although about a year of that was spent in plucking up enough courage to start on the wig! Here is a photograph: 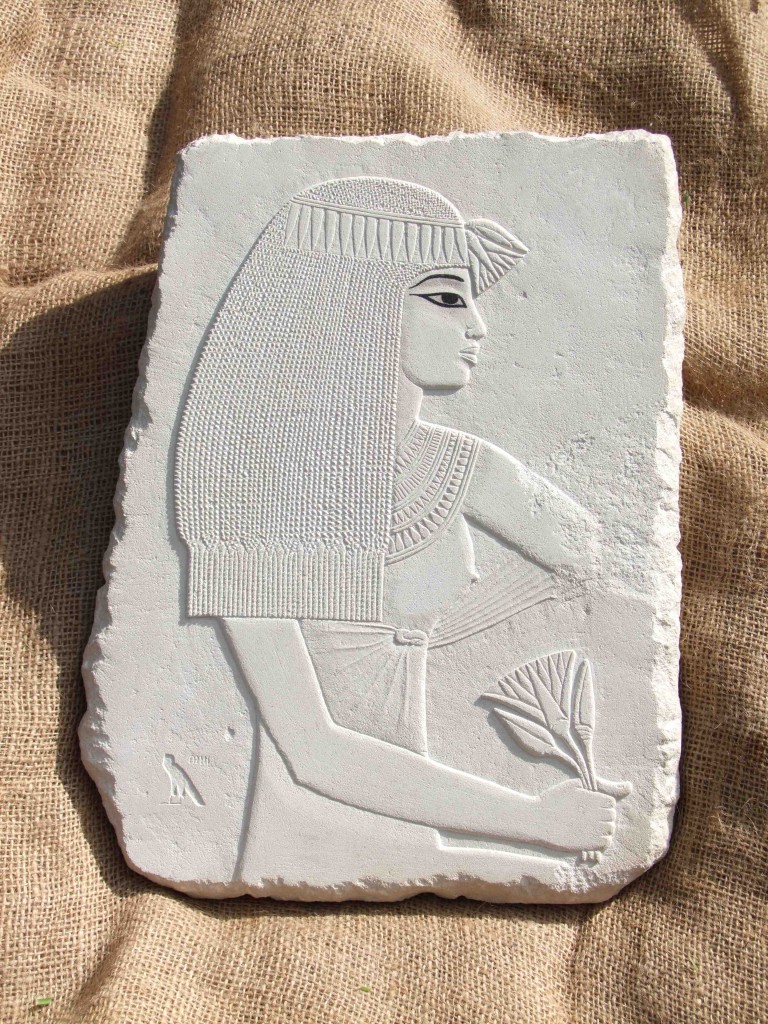 Just look at the detail on that lavish New Kingdom wig. Very difficult and time-consuming to carve, but the result is well worth the effort.

IRET NEWSFLASH, August 14, 2014: Four of Mick’s stonecarvings are on display at the 102nd Exhibition of the Association of Sussex Artists, in Horsham, during August 14–23. See his Facebook page (Aug 14) for pictures and more info.

IRET NEWSFLASH, April 17, 2014: We are at Horsham’s Piazza Italia weekend on Easter Saturday 19th, as part of Daisy White’s Booktique in the Horsham Story Theatre tent on The Forum (opposite Sainsbury’s). Come and say hello and see some of our latest jewellery and stonecarvings!

IRET NEWSFLASH, February 7, 2014: On the morning of Saturday February 8 and on other dates later in the month, Mick is demonstrating fine-detail techniques of Ancient Egyptian stonecarving as part of Daisy White’s pop-up Booktique in the Gallery at Cranleigh Arts Centre, Surrey. For details of how to get there, see www.cranleighartscentre.org

IRET NEWSFLASH, November 15, 2013: Our jewellery, cards and casts are on sale as part of the Pop-Up Indie Bookshop at the Horsham Story Theatre on The Forum, Horsham, all day on Saturday November 16, as part of the town’s West Street Story celebrations: http://www.horsham.gov.uk/community/west-street-story.aspx

IRET NEWSFLASH, September 27, 2013: Our jewellery, cards and casts are on sale at the Pop-Up Indie Bookshop in Horsham town centre during the weekend of September 27–29. We’re right opposite Marks & Spencer in the main Swan Walk shopping centre.

IRET NEWSFLASH, August 24, 2013: Three of Mick’s stonecarvings were on display at the 101st Exhibition of the Association of Sussex Artists, in Horsham, during August 15–24. They included his latest piece, a large head of Queen Tiye —

— which was completed just in time for the event. For more information on the ASA, see http://www.sussexartists.org/

IRET NEWSFLASH, August 4, 2013: Many thanks to everyone who bought our cards and jewellery so enthusiastically at this year’s Bloomsbury Summer School in London! For more information on BSS, see its website at www.egyptology-uk.com/bloomsbury

IRET NEWSFLASH, January 20, 2013: Details of Mick’s biggest stonecarving to date, a 25kg head of Thutmose IV, have just been added to our Stone Replicas page. This is the carving which was voted joint-first “Most Popular Sculpture” at the Association of Sussex Artists Exhibition last summer.

IRET NEWSFLASH, December 24, 2012: Our Christmas cards and some casts of our carvings are being sold in aid of the Oxford Expedition to Egypt (OEE) at a Leicester Ancient Egypt Society lecture by the OEE’s Paolo Scremin on January 19, 2013: Bringing the Past to Life: Work of an Expedition Photographer in Old Kingdom Monuments. The talk is at 1400hr at New Walk Museum, Leicester, LE1 7EA. For more info on the OEE, see its website at www.oxfordexpeditiontoegypt.com

IRET NEWSFLASH, August 25, 2012: Two of Mick’s stonecarvings were displayed at the 100th Exhibition of the Association of Sussex Artists, in Horsham, on August 16–25. Mick was thrilled (a) to have his work selected, and (b) to have been made a full member of the Association immediately! For more information on the ASA see www.thecmscentrehost.com/ws/sussexartists/page-3.html